Jhimla bowed low before the image of a cobra, made out of the mud and painted black. Her palms folded together, in an act of 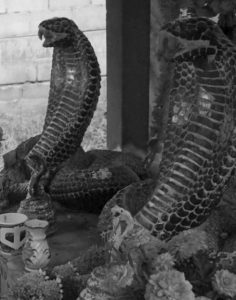 deep reverence, she sprinkled flowers on the hood of the mud cast.

At one time, Jhimla was the most revered woman in her village, considered to be immensely powerful. Villagers came regularly to present their offerings to the temple of the serpent god. According to local lore, the spirit of the serpent protects the tribal clan from harm, sickness, and destruction brought on by evil spirits. 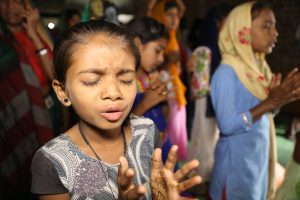 One day, Jhimla was walking to the weekly tribal market. At the edge of the village, she heard singing; it was both beautiful and captivating. Unbeknownst to Jhimla, a few families in the village were Christians. They regularly gathered in the outskirts of the village to pray, learn scripture, and worship. Jhimla said, “I was overcome by a feeling of peace as I listened to this beautiful song of worship to a God I did not know.” Despite her curiosity, she did not have the courage to go inside the hut. She was a priestess after all!

However, Jhimla soon found reasons to visit the edge of the village every evening, when it was time for the Christians to pray. She paid attention to the prayers and the scriptures. Jhimla explained further, “What I heard created a ripple in my soul. I felt something come alive in me.”

Compelled by her series of evening visits, Jhimla shouted at the serpent during one of her daily rituals, “Speak to me! The scriptures of the Christians speak to me clearly. How come you are silent?”

But she heard nothing. She felt nothing. Silence. Disappointment. “That was the last day I prayed to the spirit of the serpent,” she said. Jhimla then decided to go into the hut and join the Christian believers in prayer.

The believers were surprised to see Jhimla, the village priestess, enter their hut that evening. She was welcomed warmly by the Christians. She sat through the teaching of the Word and asked permission to come again the next night. The IET pastor said, 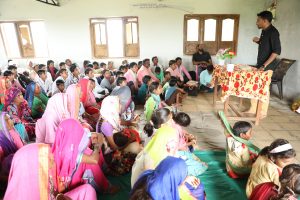 “Almighty God welcomes everybody into His presence, anytime. So, come freely!” Jhimla started attending the prayer meeting every day.

A few weeks later, she had a dream. In the dream, Jhimla saw herself walking on a muddy path. When she finally reached a fork, one road was broad and the other was narrow. Then she heard a voice, “Which road do you choose?” At this point, Jhimla woke up from her dream, immediately understanding the gravity of the choice before her. She prompt
ly stood up, bowed her head in reverence and proclaimed her decision loudly, “I will walk the narrow path.”

Jhimla dismantled the cast of the cobra and began to tell the villagers about her choice to follow “the living God.” Persecution ensued, “I was threatened with violence, but I refused to leave God. My friends and family ostracized me, but I made my choice.” 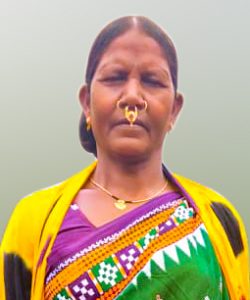 Jhimla immediately lost her position in the village, along with her only source of income. When asked about the cost of following Christ, she said, “How can you compare true life with any amount of money? I found life eternal.”

The pastor and believers helped Jhimla clear a small patch of forest, and another believer took his oxen to plow the field. A few others gave her the first batch of seed for rice and millets. Soon, she harvested her first crop, and today Jhimla earns her living from cultivating her small patch of cleared land.

Jhimla added, “I used to live under the oppressiveness of fear, appeasing the spirit of the serpent. Now, I live free. Even my worship is out of my free choice. I have no fear now.” 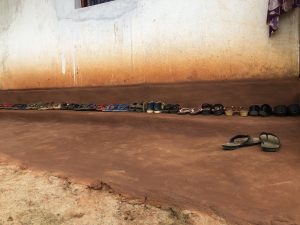