It Was a Cold and Dark Night

In a cold, dark and twisted slum in Central India, Binod stumbled over some trash. He was drunk, again. Bhargav, his three-year-old son, heard the angry shouts of his father from a distance.  He looked at his mother, Resam. He was afraid of the violence that would follow, as it happened each night.

Resam quietly placed herself between the small door of the hut and the wooden box, where Bhargav hid himself. Resam’s body became tense as the rickety door of the hut squeaked open. Binod’s bloodshot eyes scanned the room. He shouted for food and then plopped himself down on the mud floor. Bhargav was relieved. “No beatings today,” he assured himself.

TERROR IN THE NIGHT

Resam was a hard worker. She woke up early in the mornings to gather firewood from the jungle to sell and earn money to feed her family. She also washed dishes for the landlords in town. She also had to find time to take care of her home, all by herself. Consequently, her tiny body was malnourished and very weak.

Resam’s screams blended in with Bhargav’s in hellish harmony. The smoke and the horrid smell began to fill the hut. The neighbors rushed in and extinguished the fire from what was once Resam.

The terror of that night would always haunt Bhargav. 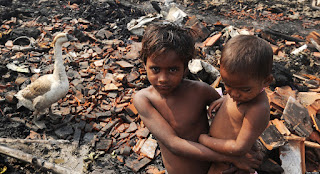 P.T., an IET missionary, works in this slum. “This is where God has called me,” he says. He goes from home to home to pray for those hurting and comforts them with the Word of God. In many cases, he finds money to help those who are hungry or who have emergency medical needs. “It’s difficult at times, because I myself do not have much. But when God asks you to reach out, we do it out of love and obedience,” he says.

One day, while visiting Bhargav’s grandmother, P.T. noticed the small, quiet boy with haunted eyes. The little boy listened from the shadows as P.T. shared the Gospel with his grandmother, his caretaker. Throughout the following days and weeks, Bhargav watched his dear grandmother’s transformation–walking straighter, eyes brighter, and genuine smiles. The changes made Bhargav curious, but he had no means of expressing that.

One day, his grandmother returned from visiting P.T. with tears in her eyes. She put Bhargav on her lap, hugged him close and said, “I can’t give you the life you need, Bhargav. I’m too old. You’re better off with P.T. I have asked him to raise you up, since with me you have no future. He has agreed.” Large tears fell down his cheeks as he clung to his grandmother. He didn’t want to leave. He’d already lost his mother and father. Unable to say     anything, he simply held on to his grandmother and cried.

P.T. greeted Bhargav as the first child to enter IET’s seventh orphanage, called Mercy Home. He calls him John, because his life is starting anew. Since he arrived at the orphanage, John has grown into a happy boy who goes to school and likes to play soccer. Every summer he spends the vacation with his grandmother. Today, eleven children along with John learn and grow in this IET Children’s Home. Here IET provides a safe place to live along with food, clothing and the best education possible. They are loved and cared for by IET missionaries who stay with them. Bhargav says, “I want to be a teacher when I grow up.”

This Christmas we want to provide each of the children in our orphanages with a big Christmas meal. This would be $3 for one child. A separate and appropriate Christmas gift for each child in our orphanage or under our care can be provided for an additional $7.